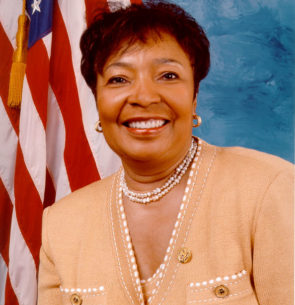 Congresswoman Eddie Bernice Johnson is serving her 13th term representing the 30th Congressional District of Texas. In December 2010, Congresswoman Johnson was elected as the first African-American and the first female Ranking Member of the House Committee on Science, Space and Technology. From 2000 to 2002, she was the Ranking Member of the Subcommittee on Research and Science Education where she emphasized STEM education (Science, Technology, Engineering and Mathematics).

Congresswoman Johnson was elected to the Texas House of Representatives in 1972 and became the first woman in Texas history to lead a major Texas House committee, the Labor Committee. As an advocate for workers, children, and families, she was recognized and appointed by President Jimmy Carter to serve as Regional Director of the Department of Health, Education, and Welfare in 1977. In 1986, she was elected a Texas state Senator, becoming the first female and African-American from the Dallas area to hold this office since Reconstruction. Congresswoman Johnson is widely recognized as one of the most effective legislators in Congress. She is credited with originally authoring and co-authoring more than 150 bills that were passed by the House and Senate and signed into law. She also has a long-standing reputation for providing excellent constituent services. Her district office in downtown Dallas specializes in working with all federal departments and agencies to assist constituents in solving a wide range of individual problems.

The Future of Wealth Awards Luncheon